controller-runtime exposes a metrics server by default on port 8080 for any controller Manager. Metrics are registered for the client, workqueue, and on a per-controller basis.

Controllers initialize metrics when started, and write to the registry at various points throughout operation, such as when processing items off the workqueue and after completed reconciliation loops. If you are using a framework like Kubebuilder, it will generate manifests for the necessary objects, such as a ServiceMonitor, to scrape these metrics using kube-prometheus in your Kubernetes cluster.

This is extremely useful, and you can easily add additional metrics that you want to collect, then write to those collectors in your Reconciler implementation. However, this can be a bit heavy-handed when developing locally, so it would be nice to have a simpler workflow for consuming metrics when you just want to test something out. I frequently spin up a kind cluster and simply go run my controllers when experimenting with new functionality. In those times, I want to have a dashboard that I can pull up and see what is happening with my local updates.

Accessing the controller-runtime metrics in this scenario is as easy as navigating to localhost:8080/metrics. For example, after running the following commands in in Crossplane’s provider-aws (assuming your kubeconfig is already pointing to an active Kubernetes cluster):

We see the output (abridged below) of all of the collectors mentioned above:

This raw output is not super consumable, and is definitely not visually aesthetic. Fortunately, the good folks who work on Prometheus have provided an image on Dockerhub and Quay that we can run locally to make these metrics much more useful. In order for the Prometheus instance to know where to scrape metrics from, we have to provide it with an endpoint in its configuration file. Here is an extremely simple configuration that will inform Prometheus where to get our provider-aws metrics from, as well as where to scrape metrics for its own operations.

Note: By default, metrics are assumed to be served at the /metrics endpoint for the supplied targets.

The last step is to run the image with the configuration file above mounted and host networking enabled (so that Prometheus is able to scrape the provider-aws localhost endpoint).

Note: Remember that if you are running Docker in a VM, additional configuration will be required as the network namespace for the Docker daemon is not the same as the local network namespace that the running controller will be utilizing.

Navigate to localhost:9090 and you will be met with the Prometheus dashboard. Typing a few characters should invoke autocomplete with some of the collectors we saw earlier. 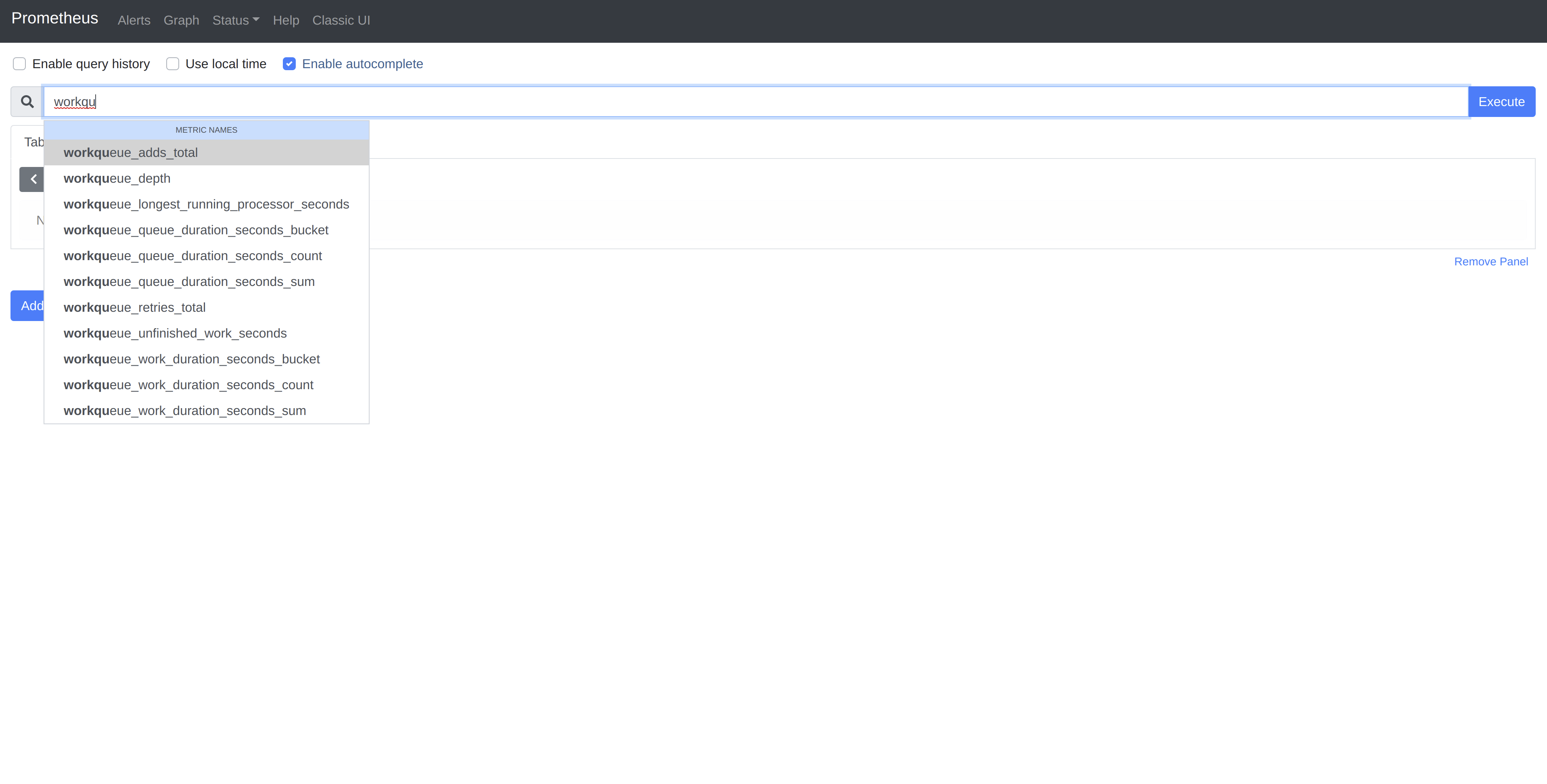 To see some of the metrics in action, we must trigger the watches on objects managed by the controllers. Since we do not have provider-aws configured with credentials, reconciling any object is going to cause failed reconciliation. Let’s create an S3 Bucket and see what happens: 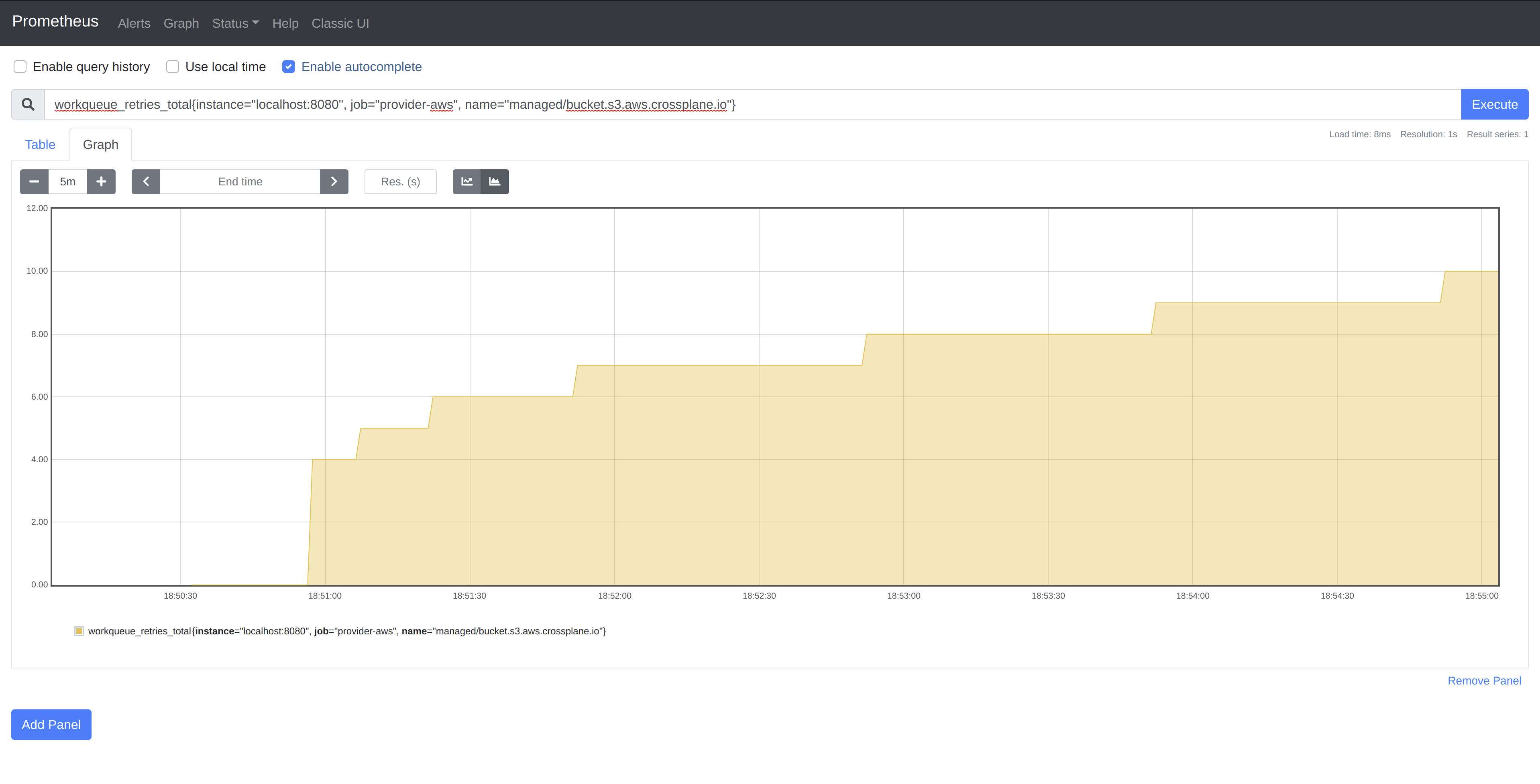 As you can see, the delay between reconciles for our single item doubles until reaching the max delay of 60s, at which time it remains constant.

Note: You will notice the first few requeues are not reflected on the graph due to our scraping interval of 5s. This can be adjusted if more granular data is required.

While this is a somewhat trivial example, the ability to quickly view the behavior of controllers, especially when running hundreds of them under a single manager, can be extremely valuable when troubleshooting performance issues.

Send me a message @hasheddan on Twitter for any questions or comments!